Home » Articles » How to write in the inverted pyramid style

How to write in the inverted pyramid style 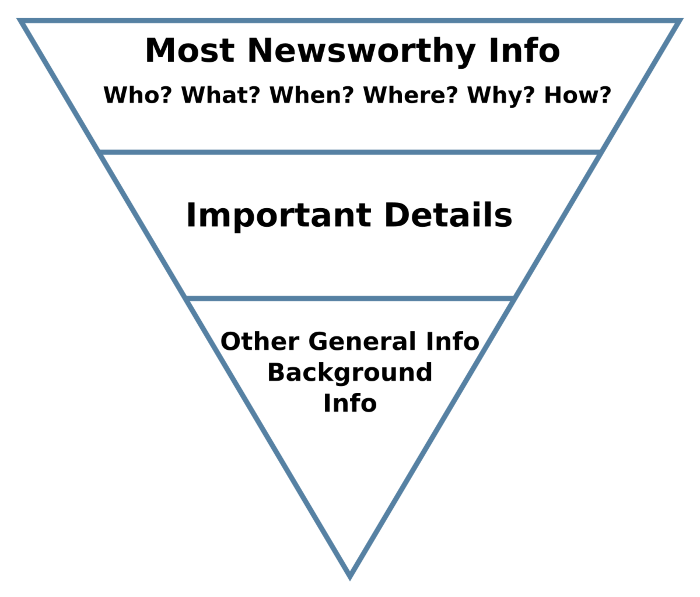 It might sound like the name of a strange sex cult, but the inverted pyramid is the most common way you can structure a story.

Usually associated with hard news stories, it can also be used for press releases, web pages, emails and anything else that needs to immediately tell the reader what they should know.

The idea is simple: you put the most important parts of the story – namely the who, what, when, where, why and how – in the first few sentences before fleshing out the details in descending order of importance.

At least, it sounds simple (some people claim even a robot can write a story by following this formula) – but it isn’t.

The reason is that every story has multiple whos and whats – and it takes critical thought to decide what what is most important.

And yes, I realise that sounded like a bad Dr Seuss imitation.

For example, if the president gives a speech at the White House, the fact that he’s giving a speech isn’t the what that should be at the top of the article. Instead, it’s what he says that’s most interesting – such as if he says he’ll lower taxes – that should be right at the top.

Then there’s the question of what details are most important – which involves thinking about the story from the reader’s perspective.

This can be seen in the basic news convention of not mentioning someone’s name in the first sentence unless they’re well known to the audience.

For example, if I go cray and cray and decide to climb Mount Everest despite having no climbing experience, the first sentence in the news story about my attempt won’t be: Dan Kaufman, 52, will attempt to climb to the top of Mount Everest next week.

It will be: A 52-year-old man with no mountaineering experience will try to climb Mount Everest next week.

Why? Because my name won’t mean anything to most people.

Some writers make the mistake of only focusing on the first sentence in the belief the rest of the story will then fall into place – but you actually need to think carefully about what should go where throughout the entire story. Every article is different and has a different set of characters and issues – and you need to juggle these in your head while thinking about what’s of most interest to the reader.

In this case, the story now needs to introduce my name, give more information about who I am, and cover the next most interesting element – perhaps the why. As such, the second sentence could be:

Dan Kaufman, a journalist who teaches writing workshops, says he was inspired by watching the movie Touching the Void.

It’s also important to use quotes from the people mentioned in your story – and there’s no hard and fast rule about when to introduce them. However, if you do have a good quote that helps explain a key point, it’s good to use it early in the piece.

In our example, the third sentence could be: “Watching that movie made me realise how humdrum my existing life is,” Kaufman says. “And besides, how hard can climbing a little mountain be?”

Of course, getting good quotes can be a challenge – but that’s a topic I might cover in a future blog post.